What You Need to Know About Preparing Your Taxes 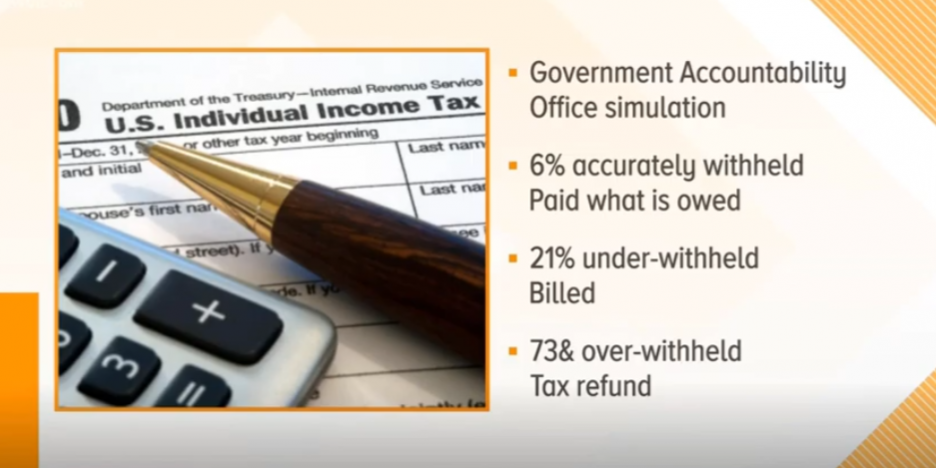 With tax preparation in full season before the April 15th filing deadline, taxpayers might be shocked by the bottom line on their tax return. Our MoneyMan Paul Fain, president of Asset Planning Corporation, joins us now with some tax advice for your personal financial plan.

IN GENERAL, DO MOST TAXPAYERS UNDER- OR OVER-WITHHOLD INCOME TAXES IN A GIVEN YEAR?

On average, more than 70 percent of Americans receive money back from the IRS. Last year, the average refund was more than $2,890. So that is what most people are expecting this year!

WHAT SHOULD WE EXPECT FOR THIS TAX SEASON – SINCE A NEW TAX LAW WENT INTO EFFECT IN 2018!

This season some taxpayers could be in for a big surprise. New survey data shows the “vast majority” of people did not change their W-4 elections last year. That is problematic because the sweeping law changed everything from personal exemptions to the standard deduction.

DOES THAT MEAN THAT REFUNDS COULD BE SMALLER, OR OTHERS MIGHT EVEN OWE MONEY?

Quite possibly! According to a simulation conducted by the Government Accountability Office (GAO):

WHAT HAPPENS IF YOU DID UNDER-PAY YOUR TAX LIABILITY?

This past month was the best January for the U.S. stock market (+8%) since 1987 (32 years)! A good January is usually an indicator of a positive year ahead.

QUESTION FOR OUR MONEYMAN?

War is emotional, but rarely impactful on company profits
April 11, 2022

Here’s how to keep your focus on the big picture during unsteady times
February 28, 2022